In preparation the 2015 season, we've spent a little time tweaking our behind-the-scenes website code. One subtle but important change made since last year relates to the way we're handling news and podcast feeds. Admittedly the finer detail of processing syndication updates is about the last thing most F1 fans will want to read about less than a week before the first track action of the year, but timing was never our strong point.

It must have been at least a year since we last posted about the Sidepodcast F1 encyclopedia, and with a brand new season almost upon us, now seems like a good time to recap many months worth of changes.

Allow me to introduce to you the brand new, completely refreshed Sidepodcast website. Following nearly two years of seemingly endless effort our home on the web has finally been knocked into a respectable shape. The pair of us can hold our heads high, grateful to have thrown off the shackles of the old world, in anticipation of a far more modern future.

The Formula One off-season presents us with a chance to catch up on a whole heap of housekeeping tasks in preparation for and anticipation of another year of F1 racing. The list of changes are many and varied for 2013/14, but one area of Sidepodcast that we are not planning to tweak or update this year are the live event threads. So happy are we with how they work that Christine has spent a considerable amount of time and energy migrating content that pre-dated the new system over to this format. 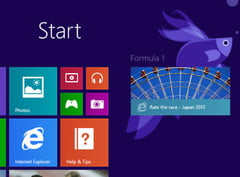 Microsoft unleashed Windows 8.1 on the world today and with it comes support for adding website notifications to your start screen. We've been playing around with the technology during the preview period to ensure Sidepodcast updates can be pinned to your screen from launch day. 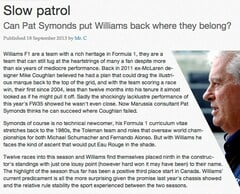 If you upgraded to Apple's latest mobile offering iOS 7 yesterday, you may have spotted a couple of unique page layouts in use on Sidepodcast. We've been experimenting with some up-and-coming web standards to see how they might enhance content readability and this new software release means we can finally try them out in public.

It seems like not a week goes by without something fresh and fancy popping up around these parts. Presented with a narrow window in this year's punishing 19 race F1 calendar, we've managed to add something a little different to the site this time around.

For the longest time Christine and I had been utilising third-party sites to store arbitrary collections of stuff that didn't sit well anywhere else. Once upon a time we used a handy service called Drop.io, before they sold out to Facebook. More recently it was Posterous before they too sold up, only this time to Twitter. There have been others in between, but the trend is getting repetitive. 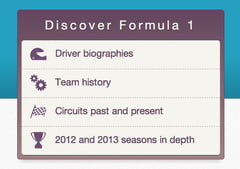 Today, with our very own F1 encyclopedia, we are introducing a whole new way to unearth information on Sidepodcast. It is now possible to start from a fixed point, for example your favourite driver, and bring up a page of resources listing each occasion where that person has been discussed on the site.

It's been almost a year since we last hosted a poll on Sidepodcast, so this week we are taking the time to completely revamp the voting experience. Hot on the heels of the recently introduced rate the race feature, we're debuting real-time and interactive live voting. 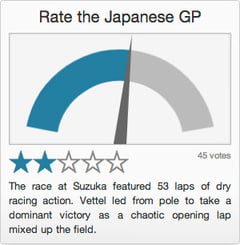 In recent years, the gap between one F1 season and the next has reduced to the point that there is barely enough downtime to prepare any new features for the upcoming season. At Sidepodcast we work around those limitations by stealing time from the tail-end of the current season back for ourselves.

One piece of listener/reader feedback that kept coming back to us since our most recent redesign, was the need to make it easier to discover when live events were taking place on the site. Start times happen to be really essential when it comes to online meet-ups, so we've found some unused space to squeeze those extra facts in.

I've spotted a whole bunch of cynicism surrounding HRT's decision to skip the upcoming F1 test in Mugello, but I can't help having some sympathy for their reasoning. Here at Sidepodcast we too are trying to make the most of a three week gap in the race calendar to squeeze in a bit of housekeeping. 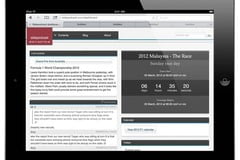 Ahead of what's looking to be an almighty season of Formula 1, we began a process of updating and enhancing Sidepodcast. Most of the changes relate to the recent increase in mobile device usage and have been well documented during the offseason.

At the end of last season, Christine and I planned to take a month off. That month of rest and relaxation essentially turned into three months of downtime as we worked on new projects and ideas for this season. F1 2012 is about to get underway in just a few hours, but I wanted to reflect briefly on how we spend our time.

There is nothing quite like working to a deadline to focus the mind, and with the start of the F1 season looming large, it is time to release more updates to the ever changing Sidepodcast homepage. On the eve of the first free practice session of the year, we are adding a new race information panel to the upper section of the site.

January at Sidepodcast HQ continued where the previous month left off, working on shiny new things in anticipation of the 2012 F1 season. Today we pulled the covers back on the next item on the virtual conveyor belt, a contact page! After many months of berating, prodding and mickey taking, Christine finally got the page she always wanted - an obvious means of getting in touch with us. Such simple pleasures. Oh yeah, we also debuted a brand new live event commenting system this afternoon. It's kinda neat.

Following swiftly on from a recent homepage update, we are now able to make one final change to how we do things around here, ahead of the coming season. This is almost certainly the tiniest of visual tweaks, and, as it will only affect a small number of readers, arguably the least exciting.

A little over a week ago, we revamped the Sidepodcast homepage. After feeling pretty good about the initial look and feel, we turned our attention to the mobile experience. Today, we are able to introduce a homepage redesign for the small(er) screen.

It seems like only recently we gave this very site a fresh coat of paint and we're at it again. In the early hours of this morning we launched a new look Sidepodcast homepage. In the current spirit of clearing the decks and starting afresh, it's out with the perfectly adequate and in with the brand new, barely tested and somewhat suboptimal replacement. It isn't finished, but it does make for a nice start.