Filed under Tweets of the Week

There was a lot of Twitter activity this week as four days of testing in Jerez were completed, with updates from teams, drivers and the media alike. There was also continued updates on Robert Kubica's condition, plus plenty of speculation over who might be in line to replace him when the season begins.

This weekend has been a tough one on Twitter, but it also shows the medium at it's very best. News of Kubica's accident broke, and in those first few hours of unknown, Twitter was not a very nice place to be. However, as soon as facts started emerging, it was an incredible way for information to be passed along, and it showed the strength of a connected community. This week was not all about Kubica, of course, although he continues to dominate our thoughts. These are ten of the best tweets from the last seven days.

The start of the season must be just around the corner now as teams begin launching their new cars and preparing to test their 2011 challengers in the first of the pre-season tests. The last of the drivers are finally being confirmed, with Paul di Resta's confirmation leaving just one race seat unknown. This week sees plenty of shocks to the system as the F1 world gets to grips with travelling again.

It's clear that we're all gearing up for the season now, with launches and testing, and keeping up with training on everybody's mind. The countdowns are in place, and the teams are ramping up with news and confirmations all over the place. Things are starting to appear first on Twitter this year, which is a giant shift from this time last year. Where will we be in a few months time? However, forget the future, it's time to look at my favourite ten tweets from the past seven days.

We've been esconced in this brand new year of 2011 for a good couple of weeks now, and as the F1 world begins to wake from it's winter slumber, it's time to bring back our weekly review of all things Twitter. New faces have popped up on the microblogging tool since we last met, and there has been plenty to mull over during the last seven days. Here is my pick of the tweets of this past week. 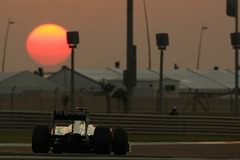 There were four days added to the 2010 season, when teams and drivers stuck around in Abu Dhabi to complete two days of young driver testing, and two days assessment of the brand new Pirelli tyres. Along the way, paddock members have been dropping off, returning home, and getting back to a sense of normality. For about a month. Then it will all begin again with launches, and testing, and the new season. For now, though, it's goodbye to 2010. 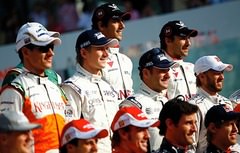 And that was it! The racing is done, we have our new championship, and the off-season starts now. As noted in the comments earlier, all the paddock hugging, good wishes and thanks to all have made it feel like term is ending, and I suppose in a way it is. However, there is still just time to look back over the week that was, and see which tweets have made the grade for me over the last seven days.

The goings on in Brazil have set up a fascinating championship finale, but only one of the titles will go down to the wire. Red Bull managed to secure the constructor's trophy at Interlagos, although it wasn't easy. Things are getting tense in the paddock as the end of the season looms ever closer. Teams are starting to look past the current battle to the future, as well, as 2011 will be here before we know it.

With just two races to go, and back-to-back ones at that, this is the final moment of calm for teams and drivers before the racing gets underway - the racing that will see the championship decided once and for all. Whilst enjoying a mini-break, we're all starting to get excited for the next few weeks - nerves are jangling, eyes are watching the weather, and the drivers are training. Here are my favourite ten (or so) tweets of this week.

Your regularly scheduled tweets of the week, here, after a special edition focused solely on the driver's reactions both before and after what was an incredible Korean Grand Prix. The racing itself was questionable, but you couldn't fault the afternoon for action and suspense. The championship is more uncertain than it's ever been, and everyone is gearing up for the final two races of the year.

What a race we witnessed over the weekend. From a ridiculously frustrating to start, to a chaotic full race distance, filled with retirements. Drivers were spinning, teams were panicking, and neither Red Bull made it to the chequered flag. Things are getting interesting. Reactions from the race have been pouring forth on Twitter, and I had filled up my allocated ten tweets by just browsing the Sidepodcast Driver list. That being the case, I thought a special edition post was in order - just from drivers, both on track and watching at home - how they saw the Korean Grand Prix.

It's been a bit of a waiting game to see if the Korean Grand Prix would actually happen, but now it has been given the go-ahead, the Twitter universe has been scrambling to prepare for what is going to be a brand new experience.

The Japanese Grand Prix provided some entertainment this weekend for all the wrong reasons, when the rain curtailed all meaningful running on Saturday. Teams and drivers took to Twitter to keep themselves amused, and if they weren't tweeting, they were busy making boats to travel down the river of water running through the pitlane.

A bit of downtime before the racing kicks off again next week - most of Twitter has been focused on other sports. The Commonwealth Games have been gearing up with mixed reports, whilst the Ryder Cup has been occupying golf fans. It's fascinating to see how the people who grace the paddock spend their weekends off.

This week, our Twitter feeds were completely dominated by Singapore from beginning to end. The race itself offered an endless stream of talking points, but even pre-race, the unique location kept our teams, drivers and media friends occupied and with plenty to talk about. There were also a lot of pictures floating about of heavy looking clouds, wet pitlanes and worrying weather. Here are some of the best tweets of the last seven days.

With the European season well and truly over now, it almost feels like a mini-break before things get underway in Singapore, despite the fact that it is the regular fortnightly gap. The teams have had no such rest, though, preparing all their frieght for the upcoming races - and tweeting about it as they go. This week, we cover all kinds of topics, including games, running, countdowns, and of course, the weather.

Another week, another race, and the Italian Grand Prix signals the end of the European season in summer. Now we're moving on towards the end of the championship, and things are getting tense out there in the F1 paddock. Even so, Twitter has been alive with news and rumours, talk of penalties and injuries, and of course, wine. Here are the ten or so best tweets I've spotted over the past week.

You'd be forgiven for forgetting it wasn't a racing weekend as Twitter has been full of teams and drivers using their spare time to the best advantage. Lotus went ahead and did some straight-line testing, Chandhok was on loan to get a peek at the new Korea track, whilst the DTM guys were busy, busy. I've narrowed it down to ten topics, but there are multiple tweets this week. Who would have thought 140 characters was not enough?

F1 got back into the swing of things in fine style, with plenty of action at Spa-Francorchamps. Of course a lot of it was down to the weather, but there were also some interesting driver decisions being made. Let's run through some of the best tweets this week, highlighting the best and worst of the build up to the Grand Prix and the race itself.

The F1 holiday is starting to come to a close, and people are either coming back refreshed and ready to get going, or they're eager and more than ready and can't stand the waiting any longer. Still, Twitter is there to keep us up to date with what everyone has been up to on their weeks off, plus there's even bit a bit of F1 news to enjoy as well.