Pre-season testing in Barcelona is all wrapped up now, with the final day dominated by red flags aplenty, but also some fast paced laps from the Ferrari. Kimi Räikkönen managed to set the fastest lap of the day, but also brought out one red flag in the afternoon, when he spun the car and stopped with what appeared to be a gearbox issue.

Red flags were the main feature of day three of the second week of testing, as teams continued to try and get long runs completed but saw their programmes halted on occasion. Sebastian Vettel was the fastest driver on the penultimate pre-season test day, helping Ferrari back to the top of the timesheets.

It took a while for the second day of testing this week to really pick up the pace, but it gradually rumbled into life and brought with it plenty to ponder. Firstly, Mercedes were back on top with Valtteri Bottas posting the fastest time not only of the day, but of the pre-season testing this year so far. He had the supersoft tyres on, which was an advantage, so we're still not reading too much into the lap times.

It was a quiet day of pre-season testing in Spain as the final week began under blue skies in Barcelona. Teams looked to be running longer distances than they did in the first four days, and were concentrating on getting a complete package out of their car, moving on from the early shakedowns we saw last week. There was just one red flag today, brought out by Renault right at the very end of the session.

As part of the sport's efforts to allow Pirelli a bit more time testing out their wet tyre selection, the Barcelona track was artificially dampened ahead of the session getting underway. It was the final day of the first week, and with a full wet track waiting, drivers were reluctant to get their Thursday running underway.

It was a quieter day overall in Barcelona, with most of the attention focused in Williams' direction. Rookie driver Lance Stroll suffered two off track excursions that limited their running. He was still faster than McLaren though, with Fernando Alonso concentrating on getting laps completed and working through the aero data gathered, rather than going for all out pace. That was their excuse anyway.

The second day of testing in Barcelona was a cooler affair with clouds moving in across the Catalunya circuit. Eyebrows were raised at the pace of the Ferraris, with Kimi Räikkönen posting the fastest time on soft tyres and Mercedes managing the second fastest time on the super-soft compounds. Times are not the most important thing in testing though, and the fact that Mercedes managed to complete 168 between their two drivers without an issue is the key point.

We've had a week of fabulous 2017 build-up with teams revealing their new cars for the coming season, but now it's time to stop talking about it and get those tyres turning. All eleven teams hit the track in Barcelona for the first day of pre-season testing, with mixed results. Mercedes and Ferrari did battle for supremacy on the debut day for the new-look 2017 cars, whilst McLaren struggled with reliability issues. Oof, this all sounds very familiar.

Ferrari finished on top for the final day of pre-season testing, making that five of the eight days with the fastest time. Today it was Sebastian Vettel's turn behind the wheel, and he completed 142 laps, the most of the day, finishing ahead of second place Carlos Sainz in the Toro Rosso.

The conversation was all about Ferrari today, as Kimi Räikkönen became the first driver to test out one of the potential cockpit protection solutions - the halo. The additional bodywork was added to the Ferrari, and Kimi was sent on his way, reporting later that the visibility was "ok." The Finn set the fastest time, after bolting on the supersoft tyres, and notably it was also the quickest lap of pre-season testing so far.

Williams hit the top of the table for the first time this year, as Valtteri Bottas posted the fastest lap time of the second day of this week's test. Lewis Hamilton wasn't far behind, once again splitting duties with teammate Nico Rosberg, and Mercedes managed another whopping 164 laps today. Having said that, Carlos Sainz completed two more all by himself!

Nico Rosberg was on the pace for Mercedes right from the start of this second week of testing, as the team put on the soft tyres for the first time. Rosberg set the fastest lap before lunch and then handed over the car to Lewis Hamilton, who set about working on a long run programme instead. Last week's pacesetters Ferrari finished the day in fourth place, with Kimi Räikkönen causing a red flag shortly after lunch.

Kimi Räikkönen soared back to the top of the timesheets on the final day of testing in Barcelona this week. The Finn set his time on the ultrasoft tyres, and helped Ferrari finish three of the four days with the fastest time. Meanwhile, Mercedes continued to concentrate on getting the lap count up, with Lewis Hamilton completing 99 laps before handing over to Nico Rosberg to total 185 altogether.

Force India knocked Ferrari from the top spot in Barcelona, as Nico Hülkenberg took the team to the head of the timesheets. Ferrari's Kimi Räikkönen suffered a lack of running after completing just four installation laps in the morning without setting a lap time, but he made up for it in the afternoon. However, he didn't manage to repeat Vettel's feat of posting the fastest lap time, and he was even deposed to third by Romain Grosjean in the Haas.

Ferrari continued to top the times as the second day of testing came to a close, with Sebastian Vettel on top after trying out every single compound in the Pirelli range. He focused on short runs in the morning with longer stints in the afternoon, and brought out a red flag minutes before the session came to an end.

We can now say the build up to 2016's Formula One season is well and truly underway after the first day of official pre-season testing went off without a hitch. Well, apart from a few early niggles here and there. Overall it was a solid day for all 11 teams, kicking off with a few more launches in the pit lane. Once the covers were off the cars, the running got underway in earnest.

Two weeks of testing so far have given us a few signs of what the coming year might be like. Mercedes are still strong, if not untouchable. Ferrari have improved, as have Sauber who have shown surprising pace. McLaren are very much on the back foot, and are now dealing with the repercussions from Fernando Alonso's accident last week as well. The Spaniard will sit out this final week, with Kevin Magnussen taking his place.

With four days of testing already completed, teams have a fair idea of what challenges they are facing over the final two weeks. Moving on from Jerez, drivers will get to grips with the Barcelona circuit - a track they should know well, and will be racing on later in the year. Force India will be participating this week, after skipping the Jerez action, but they've confirmed they will be using an older version of their car.

We've seen the pictures and now it's time to get a glimpse of the 2015 F1 challengers in action as pre-season testing gets underway. Jerez plays host to the first four days of testing, with eight of the nine teams expected to participate in some fashion. Force India have confirmed they won't be present, preferring to continue to work on the car ahead of Barcelona. 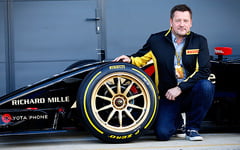 During Silverstone testing this week, Pirelli teamed up with Lotus to test out their prototype 18 inch tyres. They gained plenty of attention for doing so, although they introduced the concept rubber off their own back, rather than being requested to do so by Formula One's governing body. As motorsport director Paul Hembery said at the time, the tyres would make F1 more road relevant and that's a direction the sport is always trying to head towards.