Formula 1 team apps are often a hard sell. They no doubt appeal to fans of said team, but unless they offer a killer feature, are rarely of interest to anyone else. The question is, does Red Bull Racing's latest foray into the world of mobile devices offer such a thing?

Without Apple and without Steve Jobs there would be no Sidepodcast. Not a statement to make lightly, but true nevertheless. Steve Jobs, co-founder of Apple passed away peacefully today. Tonight we raise a glass to the man, his vision and his creations that have enabled and inspired so very much creativity. 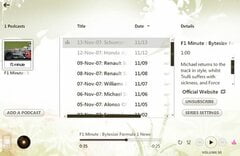 Earlier this week a brand new podcast client arrived on the scene. Created by Microsoft in response to Apple's iTunes software, the Zune Marketplace means that owners of Zune devices now have an easy way to manage their favourite podcasts. 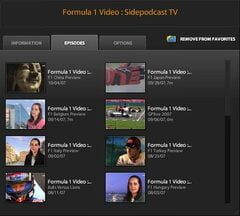 Just last week, Adobe announced a new product designed to offer an alternative to Apple's iTunes software. It's called Adobe Media Player (AMP), and given that we're completely obsessed by the latter, it seemed appropriate to give this new player a quick once-over.

Which future Red Bull driver was confirmed on this day in '04 for a test with them, to evaluate him for the seat?