The F1 world should start waking up sometime during the next couple of days. The summer break has been a welcome relief from the non-stop controversy of the 2007 season, but before we jump on the treadmill again I thought it'd be worth looking into the Electronic Control Unit contention bubbling under the surface.

Top commentors Brendan and Clive, raised some good questions last week about how a team like Honda could make such a hash or their wind tunnel setups. It's an involved subject so I figure it best to do a whole post rather than try and squeeze everything into the comments section.

Remember back in April, we were discussing the use of Tyre Pressure Monitoring Systems in F1? Of course you do.

I was reading through a couple of comments about movable floors that were left on the previous post, when I remembered the following text, relating to McLaren's request for FIA clarification, written on Autosport.com earlier this year. 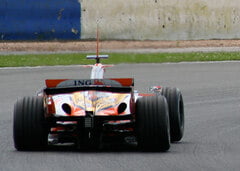 Give that man Ted Kravitz some kind of award. It doesn't matter what for, lets just celebrate the man that is Ted. This week the guy produces the goods again, with a unique insight into Renault's resurgent confidence this past week or so.

On Episode 17 (Part 2), we mentioned McLaren's bendy front wing, or should I say 'feathering' front wing?

If ever there was a dull title for a blog post eh? I wanted say a quick something about TPMS and I'll try and make it interesting. Well, interesting may be stretching it actually, but bear with me.

They've been talking about it for a long time, so long that I stopped paying attention. But now the FIA has decided that teams will have to make their tyre choice obvious to all and sundry.