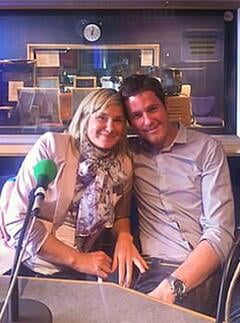 Everyone's favourite race engineer, Rob Smedley, made an appearance on the lovely Lisa McCormick's show on BBC Tees earlier today. Joined by his wife Lucy, Rob talked about the Formula One season so far, his future plans in the sport, and the F1 themed charity dinner that will take place in early September. 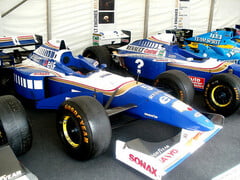 You may not have noticed this, but I am a Rubens Barrichello fan. I never mention it apart from... well, always. This obvious statement has a point though. You see, over the years Rubens has been part of some big teams, and also Jordan too. Sorry Eddie. The biggest name, so to speak, in the sport in terms of teams would be Ferrari, and we all know about some of the times spent behind Michael at the team, but I feel that if you asked Rubens what team he has always looked up to and wanted to be a part of it would be Williams.

MercedesGP have a new member of the team, and he's tried his hand in the car, in the garage, and back at the factory. Silbear has been plucked from the merchandise store and is travelling with the team this year to learn everything he can from the mechanics, and get experience for a more important role next year. Maybe.

Free Practice is not the most relevant of sessions throughout a Grand Prix weekend, and given the tyre restrictions, we've seen less and less running as the year goes on. However, the teams are still out there doing something, and it'd be nice if we knew what they were doing on, and how they compare.

The Lotus versus Lotus court case came to something of an end today, with the judge finally making his ruling, although I believe Group Lotus are going to appeal. Nevertheless, as it stands, the judgement is in and things have not changed one single iota.

To celebrate his five races in Formula One, Virgin Racing treated and/or subjected Jérôme D'Ambrosio to a rollercoaster ride - in the full knowledge that he's terrified of heights. It's always great to see drivers letting loose and showing us a more sensitive side, and poor D'Ambrosio reveals just how great his fear is as he takes to the steps towards the ride.

Mercedes GP have confirmed the appointment of Bob Bell today, signing up the former Renault chief as Technical Director. Bell has plenty of Formula One experience to bring to his new team, having worked his way up from an aerodynamicist role. He's been involved with several teams, including McLaren and Benetton, and now brings his expertise to Mercedes.

Force India confirmed their new lineup today, and Tonio Liuzzi was noticeably absent from the list. Whether you're a fan of the driver or not, you can't escape the fact that he has been pushed aside at the expense of an already signed contract. Towards the end of 2010, Tonio was talking about his future prospects and was confident he would be racing with his team this year.

Williams F1 have released a statement today confirming that they are investigating the possibility of floating the company on the stock market. There have been no final decisions made, but conversations are taking place between co-owners Frank Williams, Patrick Head and Toto Wolff. If it did come to pass, the move would be in a bid to secure the future of the team, something that has consistently been speculated on for the past few years.

It's been a rumour for a while now, and with so many Lotus headlines flying around it was only a matter of time before this one became reality. Lotus Group - the ones that don't involve Tony Fernandes and the 2010 outfit - have invested heavily in the Renault F1 team. They are to be title sponsors of the team which will be renamed Lotus Renault GP. 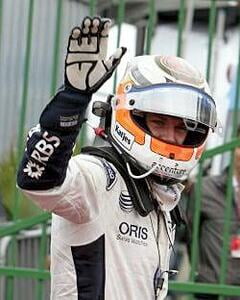 In mid-November, Williams announced that Nico Hülkenburg would not be racing for them in 2011. It had been rumoured for a while, but even so, the announcement did surprise a lot of people. Hülkenburg may not have had a brilliant season, but after achieving a pole position and 14th in the World Driver standings in a very competitive season, he did do very well for a rookie.

Williams issued a press release today and with it comes the least surprising news of, potentially the entire year. For months, now, the name Pastor Maldonado has been linked with the team in Grove, and after the departure of Nico Hulkenberg earlier this month, it was only a matter of time before this announcement came.

Moments ago, the confirmation came that Williams won't be running rookie Nico Hülkenberg next season, despite an outstanding performance by him in Brazil. We have been speculating over the future of the German for a while now, with three drivers linked to Williams, and only two spaces for them.

Toro Rosso's main headlines this year have come from getting in the way of other drivers, or from just missing out on something significant. There have been more than a few penalties for them as this season draws to a close, and Alguersuari and Buemi seem to be getting quite frustrated at the lack of results. Who can blame them?

Renault have decided to take the place of Lotus as hoarders of the headlines today, with the announcement that Managing Director Bob Bell has left the team, and Eric Boullier will be taking his place with immediate effect. There's no reason given as to why this has happened so suddenly, but it seems to have been something that was always in the goal, as Genii boss Gérard Lopez refers to this year as a "transitionary" one.

Sauber have today confirmed their full line-up for next season with the announcement that Sergio Pérez will join Kamui Kobayashi on the grid. There are no more silly season rumours for Peter Sauber's team, as the 20-year-old Mexican driver joins F1 from GP2.

Lotus Racing have been in the news far too much this week, already, but today they have tried to offer up a bit of a feel-good story with the confirmation that Mike Gascoyne will be sticking with them until 2015 at least. Not only is this good personnel news for the team, it also shows that they have no signs of giving in to any legal wranglings from outside the paddock.

Today, Lotus Racing announced the not-very-surprising news that they are taking on the name Team Lotus. The changes will happen gradually, but from 2011 Lotus Racing will be no more. Tony Fernandes secured the purchase of Team Lotus Ventures Ltd, owners of the rights to the name and logo of the much-loved team of old.

Cosworth issued a statement last night confirming that they would be ending their engine supply agreement with Lotus at the end of this season. The initial contracts were set up on a three year basis, and all three new teams signed up with Cosworth, but Lotus have been particularly vocal about their dissatisfaction with the product they've received.