Now I know what you're thinking. You come onto Sidepodcast, you see something about the name Frank, you expect something about French greatness. Whilst there is no disputing Mr Montagny's greatness it is instead another Frank that we need to discuss after the 2014 F1 season – a certain Sir Frank Williams and the epic resurgence of a team that Formula 1 should always have near the top.

Formula One is an expensive business, and it seems that there have been at least one or two teams in financial difficulties for the last few seasons. The situation has come to a head over the past few days, and it has been confirmed that both Marussia and Caterham will miss the next race in the United States, and are unlikely to see out the end of the season. Both teams are in administration, with buyers hard to come by in the current economic climate.

Mercedes wrapped up the constructor’s championship in Russia with a convincing 1-2 victory that took their tally up to 565 points and sealed their first ever team trophy. The feat has seemed underplayed, however, with just a few champagne celebrations in Russia, and the inevitable distribution of World Champion winning t-shirts. (It always irks me that teams have presumptuous t-shirts printed up, no matter how obvious the outcome.) Part of the muted reaction to such a dominant performance is in part due to the ongoing reflections regarding Bianchi’s accident, but much of it is down to the sheer inevitability of it all.

The Canadian Grand Prix was book-ended with crashes. Sergio Pérez and Felipe Massa managed to get most of the headlines, for the last lap incident itself, and all their post-race arguing, but I was more interested in the first lap crash between Max Chilton and Jules Bianchi. The Marussia teammates committed that cardinal sin of taking each other out of the race, leaving the team without much to do for the rest of the afternoon.

Marussia’s celebrations after scoring their first ever Formula One championship points in Monaco were a breath of fresh air in what was otherwise a tense and hostile weekend. The glee of the small team was akin to a win, as Jules Bianchi helped steer the team to eighth on track, ninth in the results, picking up two very important points.

Sauber announced this morning that rookie driver Esteban Gutiérrez will get a second season with the Swiss team. The Mexican will partner the recently confirmed Adrian Sutil for 2014. In conjunction, Telmex, the Mexican telecommunications company, have extended their partnership and driver development programme.

We've all been there. One ill-advised beverage too many at a weekend party and you wake on the sofa, face sporting a drunken makeover courtesy of a colleague and their errant permanent marker. Apparently that happened to Sergio Pérez in Abu Dhabi, who turned up to the circuit with this rather creative comedy moustache.

Williams F1 are a team with a rich heritage in Formula 1, they are a team that can still tug at the heartstrings of many a fan despite more than six years of mediocre performance. Back in 2011 ex-McLaren designer Mike Coughlan believed he had a plan that could drag the illustrious marque back to the top of the grid, and with the team scoring a race win, their first since 2004, less than twelve months into his tenure it almost looked as if he might pull it off. Sadly the shockingly lacklustre performance of this year's FW35 showed he wasn't even close. Now Marussia consultant Pat Symonds thinks he can succeed where Coughlan failed.

If there was ever a perfect summary to sum up a depressing year, Nico Hulkenberg’s remark over the radio during Free Practice 2 at Silverstone today was it: "Even with DRS, I cannot pass a Marussia.”

It's been just four short months since HRT went missing from Formula One, and it hasn't taken long for them to be forgotten about. The battle of the backmarkers continues with just four participants, and the first session of qualifying is actually more interesting without them.

The headlines surrounding Mercedes seem to be snowballing as we head rapidly towards the launch of their new car, and they are not all necessarily for the better. With Lewis Hamilton celebrating his first day at the factory, and Toto Wolff's announcement that he's now an Executive Director, comes the news that Ross Brawn and Nick Fry could be heading for the exit.

This year, McLaren introduced something new and rather fabulous - supposedly aimed at the kids, but also very much entertaining for adult F1 fans alike. Tooned was a series of animations, airing alongside each race, and following the exploits of the drivers and crew as they test experimental machinery at the McLaren Technology Centre.

Recently I learned of a surprising fact on the internet in regards to the recently completed 2012 season and McLaren. Perhaps you have heard already, but if not it goes something like this: After a McLaren win, that driver, be it Jenson or Lewis, would not score points in the following race and most often wouldn’t even finish!

It's always good to see behind the scenes of a team's working relationship, particularly in Formula One, when a driver needs to consider the engineers and mechanics around him as part of the family - win together, lose together, and all that. Video insight is very welcome when it comes to getting access to the places a fan would not normally see, and it's even better when there's a practical joke on the cards too.

The USF1 team didn’t work out for one reason: money. Sure, one could argue that there were other contributing factors but the truth is that Ken Anderson and Peter Windsor are competent folk. Speculation was that the technical team wouldn’t work out, or that the logistical nightmare of developing a car across the Atlantic would doom the team but the long and short of the matter is it never got that far.

Williams F1 have released a statement this very morning with the surprise announcement that CEO Adam Parr will leave the team at the end of the week. The team suffered a difficult 2011 season but had put their confidence in a renewed squad to get better results this year. With two races under their belts, they are starting to pick up a few points, and things are looking better.

It has long been obvious that Ferrari don't care for Felipe Massa as much as they used to. We knew that the hiring of Fernando Alonso was instantly going to push Massa down to second driver status, but the depth to which he has fallen in their estimations keeps on surprising me. Earlier in the year, we raised eyebrows at the Inside Ferrari Twitter feed when they proclaimed a qualifying disaster for Alonso because Massa finished ahead. When the roles were reversed though, in the exact same grid slots, it was a brilliant weekend for all involved. 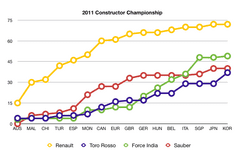 At the Korean Grand Prix, Jaime Alguersuari finished in a very strong seventh place, with teammate Sébastien Buemi ninth. Between the two, Toro Rosso managed to pick up some much-needed results, and the well-timed finish sees the team close up the gap to Sauber in the Constructor's Championship. Now, Toro Rosso are part of the only really intriguing battle left in the 2011 season.

Mark Webber has agreed a contract extension with Red Bull for 2012. Tony Fernandes let slip that both of his drivers would remain at Lotus next season. It's all but been confirmed that Jenson Button will be with McLaren for yet another year. Silly season has never been so boring. Yet, with the drivers all remaining so very loyal from one year to the next, it falls to the team personnel to provide us with the silly season we are missing. Who knew that those behind the scenes would be so interesting?

At the beginning of summer break I got to pondering how well last year's new teams – namely Lotus, Virgin and Hispania – were doing. I started with a simple analysis of their qualifying performance statistics to see how far they were off the leaders, only to find that they had all gone backwards. I eliminated the Bahrain results, because they didn't paint a true picture of what each team was capable of – especially since Chandhok's first time in an F1 car was in qualifying. Still, it looked as though they had regressed.

Which popular North American circuit was confirmed to be back on the calendar on this day in 2009?