Thursday's Duels showed the rule changes implemented by NASCAR have all but eliminated the 'two-car tandems' of 2011, we're back to the classic restrictor plate pack racing we've seen for the previous decade or more - for better, or for worse. This means anyone can win, yet will also mean any accident is that much more dangerous. That said though, pack racing is a skill in itself. It takes a lot of effort to work through the draft whilst the cars are moving around, bumping, squirming, side by side for 10 rows! This race marks the Sprint Cup debut of Danica Patrick. FOX may mention this once or twice. Will she win? You'd think not, but one year ago the 500 was won by another series rookie, Trevor Bayne, so anything can happen! 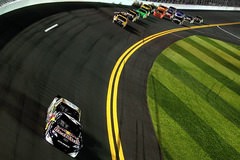 Taking place in the IndyCar Mecca that is the Indianapolis Motor Speedway, the Brickyard 400 sees NASCAR's rolling stock car machines tear upon hallowed ground once again. First held at the Speedway in 1994, the 400-mile race has seen some good races, some controversial ones and famous winners; although in recent years, it has been controversy that has made headlines.

The 2007 season has been so long in coming I've taken to watching NASCAR. Now I appreciate that may be a dirty word to some Formula 1 fans, but please bear with me a moment.

After which race, held on 29 Sep, did Schumacher suggest he granted Barrichello the win as payback for Austria '02?