The 12 hours of Sebring is ready to get underway and I'm sulking just a little as Team Peugeot Total haven't put Franck Montagny forward for this round. They're fielding two cars this year, which between them have locked out the front row.

Cast your mind back to September 2009, and the sports car endurance race, Petit Le Mans. One of the big talking points of the weekend was an incident involving Scott Sharp meeting a catchfence. Sharp managed to walk away from the scene of the accident, but his car had certainly seen better days.

We weren't all that impressed with the Nations Cup yesterday, but Mr C has already written about the whys and wherefores. I am not here to moan about the scheduling or the lack of atmosphere but simply provide the second half of our live commenting threads - for those that can overlook that stuff.

Cast your mind back to the middle of December last year. It was a time when very little racing was going on, things were winding down for the year and many of us were itching to see some track action.

We covered the Race of Champions last year in great depth, and the event was a brilliant success thanks to the free streaming provided by Freecaster.tv. Here we are again, although the scheduling is vastly different...

There is more Franck racing on today with Petit Le Mans starting very shortly. Mr C and I know very little about this kind of thing, but I always try and encourage support of FKM. To help us out, Scott Woodwiss has written an excellent introduction to the race.

As it turns out, this endurance racing lark is actually quite popular. With that being the case, we're going to split the 24 hours into two threads of roughly 12 hours each, but don't let that put you off.

Hands up who's staying up for 24 hours then? I don't know if I'll make it, but I hope to do better than last year when I fell asleep with my face on a laptop. Who knew a keyboard could leave such a fancy imprint?

Franck's first race of the season kicks of at 2:30pm (we think) and this is the place to live comment all the action. The 12 Hours of Sebring also involves some other people - Le Seb is in the same car as FKM, whilst Allan McNish is a friendly rival.

As promised, here are some highlight clips from yesterday's action at Wembley Stadium. I think more are still being made available (was hoping to see some of the X-Fighters demo), so we'll probably update this page as and when.

For the first time ever, this year's Race of Champions is being broadcast online. freecaster.tv have kindly provided a streaming player which is embedded below and we'll be following all the action from 13:50 GMT (14:50 CET) this afternoon. 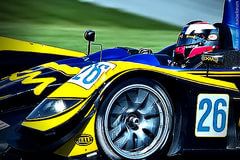 It appears to be tradition in America to do things bigger and better than anyone else. Except apparently in the case of Petit le Mans, which by all accounts is a shorter and less important version of the race from which it takes it's name.

Actually, the title may be a bit misleading. I'm not staying awake for 24 hours, not even for Franck. This thread is here for any Le Mans discussion, although it's not aiming to replicate the Live Comment phenomenon of an F1 race weekend.