This is it, the big race! A whole year of waiting is now over. The return of Porsche, and yes Webber too. Toyota starts as favourites and Audi are playing it safe but this is Le Mans and anything can happen. GTE Pro is worth a look, pro drivers in Astons vs Ferraris vs Porsches vs Corvettes always is. Throw in a huge LMP2 and GTE Am field of pro-am cars meaning traffic-management will be crucial. And don't forget to follow the Nissan ZEOD, which is like the Delta Wing but is a hybrid. Get ready your cheese baguettes, pain au chocolat and a glass or three of wine, for tonight we journey to the centre of France.

As we approach the 24 Hours of Le Mans 2014 it is worth looking at the points standings for the FIA World Endurance Championship and the prospects for the rest of the season. Two rounds have been held so far, 6-hour races at Silverstone in April and Spa-Francorchamps in May.

Two days of activity precede this year's edition of the endurance classic. Wednesday sees four hours of free practice from 15:00 UK time, followed by two hours of qualifying from 21:00 UK - expect the fight for pole in this Wednesday night session unless it rains. On Thursday we see another couple of 2 hour qualifying sessions, at 18:00 and 21:00 UK time, but in recent years teams have switched to race set-up by now. Thursday is worth watching because you never know what'll happen and there is lots to learn, but that shootout for pole will surely be on Wednesday.

The fuss made in Formula 1 about the new-for-2014 power units is well-documented. Flying somewhat under the radar are the developments in sportscar racing, the LMP1 class at Le Mans and in the FIA World Endurance Championship. In the week of the great race itself, just what is going on?

The FIA's new World Endurance Championship kicks off at Silverstone, with plenty of famous names and faces getting back in their cars, or trying the sport anew. Mark Webber is one of the key figures for this first race, as Porsche make their big comeback and the Australian driver makes his post-F1 racing debut. We'll also get to see how Audi get on without Allan McNish, and cheer on little Anthony Davidson, and perhaps even Lucas di Grassis. Six hours of racing awaits, so sit down, grab a glass, and enjoy!

For the first time in 17 years a major championship features both of America's classic endurance races, the Daytona 24 Hour and the Sebring 12 Hour. That series is IMSA's United Sportscar, the result of the merger of ALMS and GrandAm. Back in January on GrandAm's turf the Daytona Prototypes ruled the roost, now we're in the back yard of the ALMS will the LMP2 cars reassert themselves? Will the GT classes again be ridiculously close? The top line LMP1 cars may have gone but with 64 cars in the field there are storylines aplenty.

This year's Daytona 24 Hours is far more special than usual. It signals the beginning of a new era. The American Le Mans Series and the Grand-Am Rolex Series are no more, NASCAR purchased the former and merged it into the latter to create the TUDOR United Sportscar Championship. Featuring cars, teams and drivers from each series plus a star-studded list of guest drivers all through the field from F1, IndyCar, WEC, NASCAR and beyond, the 2014 Rolex 24 is sure to be a classic.

Despite the fact that he is soon to celebrate his 44th birthday it came as a total shock that Allan McNish had announced his retirement. He had just won his first world championship and is still absolutely at the top of his game. Aside from that, a large part of the last issue of the magazine Motor Sport had been dedicated to him which was only fair as he was the guest editor. He was asked about retirement and said that he knew that he would not be racing in 5 years time. I was so looking forward to watching him particularly closely next season in what I thought may have been his last year. Now that is not going to happen.

Georgia's 1000-mile autumn classic concludes the ALMS season for the final time. In 2014 US sportscar racing enters the brave new world of #thefuture with the Tudor United Sportscar Championship (TUSC). Today though will surely be a bittersweet event as we wave goodbye and celebrate 15 years of the ALMS and, hopefully, send it out in style.

Le Mans 2013 is full of famous names from across motorsport, with drivers not just from sportscar backgrounds but also from F1, GP2, IndyCar, touring cars, even V8 Supercars. Senna, Chandhok, Di Grassi, Kobayashi, Briscoe, Conway, Bright. These are liberally spread across four classes, four races happening on the track at the same time. Audi walkover? Maybe, maybe not, but there's plenty else to watch for at Le Mans.

The Le Mans 24 Hours, like the Indianapolis 500, seems to go on for weeks but we are now getting to the important part of the event. Tonight we have 2 hours of qualifying. The pole position and the race win will be decided between the three Audis and two Toyotas in the LMP1 class. However there are a number of different classes from the less expensive prototypes in LMP2 to GT cars. There is guaranteed to be something to keep everyone interested.

The incredible Mount Panorama circuit host more than one endurance race per year. The 1000km V8 Supercar race may be more famous but this younger event for GT3 and Touring cars is growing in stature. This year's race has the biggest entry yet: 47 cars with some 'name' drivers like Mika Salo and Bernd Schneider, and coverage for the first time from Radio Le Mans including web video (which acts like a DVR so you can pick up where you left off). The atmosphere at The Mountain is very relaxed, there's no championship on the line and no points, so just dip in and out whenever you feel like it!

The Rolex 24 Hours of Daytona is the annual start to the racing year. Other races and rallies may start earlier but nowhere other than Daytona features as many top drivers from different series coming together to start their season. If Le Mans is mostly about cars, Daytona is almost all about drivers. This year's 51st running is the last of an era as we close the book on the Grand-Am years, next year there will be a merger with the ALMS meaning Daytona and Sebring will become part of the same series. Daytona is fast and tough on cars yet somehow it always breeds a close race.

This weekend's 51st Rolex 24 Hours of Daytona features an all-star cast including several former F1 drivers and several current IndyCar, NASCAR and DTM stars. As it runs outside the 'regular season' it attracts drivers from all over the racing world. Add them to the existing Grand-Am field and you have a very impressive line-up!

The end of season multi-series spectacular is set to take place in Bangkok this year, with plenty of F1 faces turning up to try and get their hands on victory. It's no surprise that Sebastian Vettel and Michael Schumacher are the defending champions in the Nations Cup, the pair proving a formidable partnership for five years. Meanwhile, the individual champion from 2011 was Sébastien Ogier, who also returns to defend his crown. The action begins at 1pm GMT on Saturday and the same time on Sunday.

Petit Le Mans only began in 1998 and is already established as one of the world's great races. The picturesque yet narrow Road Atlanta track provides the perfect setting whilst remaining a challenge for all. No longer a round of the ILMC/WEC, so there's no Audi or Toyota, it isn't a US-only affair. The WEC team Rebellion Racing are taking the opportunity to bring an LMP1 car to race for the overall win against the ALMS regulars. As well as a full ALMS grid we'll also see some ELMS teams from Europe competing in LMP2. In drivers, Dario and Marino Franchitti team up, Martin Brundle's son Alex is here, so is Brendon Hartley. And what's more - the Delta Wing will be making its 2nd race appearance. The race lasts for 1000 miles or 10 hours, 42 cars on a short twisty track, this race practically guarantees drama every season. With no Audi/Toyota whitewash and an unreliable LMP1 field the race is completely open. You'd be mad to miss it.

Welcome to one of the race events of the year, the 24 Hours of Le Mans. Up front we all expect Audi to win but in qualifying Toyota were also quick - will either hybrid design be reliable enough to last the distance? The same question can be asked of the unique Delta Wing experiment which has suffered electrical gremlins so far this week, fingers crossed those problems are solved. Away from the technologically interesting cars we do actually have some close races! Watch the 'independents' fighting tooth and nail to finish as best behind the manufacturers - they might even take a few big name scalps. Behind them, the LMP2, GT Pro and GT Am classes are wide open and you can't pick a winner in any of them. 24 hours. 56 cars. 168 drivers. Boring? Not on your life. 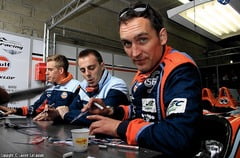 So you think this year's edition of the 24 Hours is going to be boring? Audi will win? Well yes they will but never mind that - racing is about stories and there are 52 other stories to be played out at Le Mans this year. This is the perfect opportunity to dive into the other four races happening on the track - particularly the battle for 'best behind Audi/Toyota' which has plenty of F1 interest to follow. Keep an eye on the Delta Wing, too!

After the opening salvos yesterday there is another chance today to improve your times. Those who feel secure will surely switch to looking at race performance so this could be our first real sense of who will be quick at the weekend. Those looking risky or who think they can make improvements will still be out there going for qualifying times or simply giving their drivers laps. Do still listen along to Radio Le Mans for all of the latest news and gossip and to learn all about this weekend's race. During qualifying each car has three drivers, each of those drivers must run some laps in darkness to qualify. Each car must be within 110% of class pole. Times carry over between sessions so you can set your fastest in any of the three periods.

Welcome back to La Sarthe! Nothing beats the magic of Le Mans. Despite the competition up front being more limited than we are used to there is plenty to keep us interested in the rest of this 56 car field. Audi and Toyota have new hybrids, there's the battle for top privateer/petrol entry (including ex-F1 drivers), the intrigue of the Delta Wing, and a small yet very strong contingent in GTE Pro. For qualifying each car has three drivers, each of those drivers must run some laps in darkness to qualify. Each car must be within 110% of class pole. Times carry over between sessions so you can set your fastest in any of the three periods. Many teams may elect to do their real qualifying runs now as some prefer to use the Thursday to switch the car to a race setup. This of course depends on the weather!

Robert Kubica was injured rallying on this day in 2011, but which Italian rally was he participating in?