Filed under Rules and regulations

There's plenty of talk going round at the moment about the possibility of a London Grand Prix in 2012 to be included in the Olympics. I've been watching some of the Olympic coverage, alright, a lot of it, and there are a few incidents I've seen that show good reason for this not to happen. 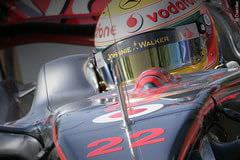 Back in mid-January we had a bit of a discussion on the show, regarding some of the nonsense Ron Dennis was spouting during the unveiling of McLaren's 2008 challenger in Stuttgart.

If the FIA ran football, so the saying goes, we'd have square balls and round pitches.

Yesterday was a bit of a busy day for the FIA. Firstly, there was the release of a document explaining Renault's non-penalty for unauthorised possesion. This was swiftly followed by the announcement that McLaren will have to wait until February for a conclusion regarding their 2008 entry.

In less than two days time, the FIA's Court of Appeal will convene in London, to hear McLaren's case against the result of the Brazilian GP.

An update on the FIA's website this morning states...

Bernie Ecclestone hasn't been in the headlines for a bit, so he's decided now is the time to come out and suggest a revision to the points system.

Which team were to lose the services of Olivier Panis, when it was confirmed on 16 Aug that he'd be moving to BAR?