The German Grand Prix had the potential to provide a mixed up race, after penalties and wet weather played havoc with the qualifying results. However, come race day, it wasn’t all surprising but still fascinating as the strategies unfolded and the winner was decided. Fernando Alonso secured his third win of the year, and so it is with him, and Ferrari, that we shall begin.

In an interview with the BBC following his early exit from the British Grand Prix, Sergio Pérez openly criticised rival Pastor Maldonado's driving abilities, suggesting other F1 drivers have also voiced concerns about his approach to racing.

It's a bad day for Timo Glock, and Marussia, as it has been confirmed that the German driver will have to miss the race in Valencia as he has a serious stomach bug. His appearance over the weekend had been in doubt after limited participation in the practice sessions, and sitting out qualifying altogether, but we had hoped he'd be feeling better for the race. The FIA stewards had said he would be allowed to race despite not qualifying, if he was feeling better, but it was not to be.

So as the F1 circus leaves Canada after another fantastic Grand Prix, giving us a new record of seven different winners in seven races, no one is happier than Lewis Hamilton as he secured his third Canadian GP win. This season gets better and better as we travel around the world, still with no idea of who will be competitive when the teams rock up at the start of the race weekend.

After we were treated to a traditional Monaco Grand Prix with all the hype in the build-up and lack of actual track action, it is difficult to see who really got the maximum out of their car. The usual frustrations of Monaco were compounded by two factors: it seems it is the only track where there is no cliff edge for the tyres (although this is almost certainly due to the huge advantage of track position) and the weather front that conveniently arrived mere minutes after proceedings had finished. It's a shame that Monaco is such a big advert for Formula One as the scenario needs to be perfect for it to excite the viewer.

So another race, another winner. This season is turning into an incredible one and despite the calls that Barcelona would sort out who had the genuine pace we are still no nearer to being able to accurately predicting this year's world champion. So who stood out? Who outperformed their technology on Sunday? Anyone fancy saying 'pay driver' and Pastor Maldonado in the same sentence? Whoever does is very brave and suddenly looks very deluded.

Pastor Maldonado converted his debut F1 pole into his first ever Formula 1 race win this afternoon in Spain. In doing so he also ended his team's eight year winless drought, but post-race celebrations inside the Williams garage came to an abrupt halt when fire broke out at the rear of the building.

Qualifying in Spain today offered up enough of a surprise when Pastor Maldonado was fast throughout, and found the pace to finish on the front row of the grid. Lewis Hamilton was in pole position, with a time half a second faster than that of Maldonado's Williams beside him. However, the surprise took another twist several hours later, when the stewards stripped Hamilton of his time, promoting Maldonado up to pole position.

This season there have been many good drives. Sergio Pérez and Fernando Alonso at Malaysia spring to mind, not to mention Nico Rosberg last time out in China. In Bahrain it was just as unpredictable, as this F1 season continues to amaze and astound with surprise results. The field is so open, after four races, eight drivers have stood on the podium and 18 have scored points: Felipe Massa finally adding himself to this list, but not reducing the pressure on him going into the European season.

This year, I'm trying my best to keep on top of all the action in the races. My post race team by team updates are a great help, and the Factbyte Factbox provides lap by lap coverage which I can look back on when required. Sometimes, a race is just so frantic that it's hard to follow and the Chinese Grand Prix was one of those! The second half of the race was so action packed with the top ten cars (minus Nico) separated by just twenty seconds. 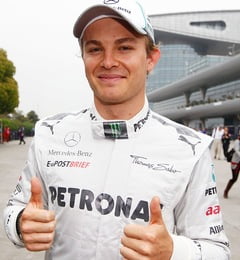 Nico Rosberg took a storming pole position today, securing his first P1 grid slot since he joined Formula One in 2006. Mercedes have shown great pace in qualifying so far this season, and it seemed as though it would only be a matter of time before one of the two drivers managed to top the times on Saturday, when it matters. Michael Schumacher led a practice session in China this weekend, but it was his teammate that posted the fastest time during the top ten shootout in qualifying - by a significant margin.

Questions to the top three drivers following the race on Sunday at Interlagos.

Questions to the top three drivers following the race on Sunday at Yas Marina.

Qualifying in Abu Dhabi today showed that Yas Marina is one of those circuits that favours the car rather than the driver. The top ten shootout featured five complete teams, with both drivers from each making their way into the final session of qualifying. When the results were done and dusted, teammates found themselves lined up next to each other... all except one.

Questions to the top three drivers following the race on Sunday in India.

Questions to the top three drivers following qualifying on Saturday in India.