The Red Arrows have been one of my favourite British things for a long time, despite my fear of most things plane-shaped, and the fact they sometimes run a formation with just eight. I have held a bit of a grudge over that wonky formation but I think now I will have to forgive them, because the Red Arrows and Formula One have just crossed over... with incredible style.

The moment Lotus F1 announced they would be headlining the first-ever Manila Speed Show, I was thrilled. I was excited - not so much by seeing an F1 car run in the flesh again (which I hadn't done so for 3 years before this weekend), but by F1 actually being in the Philippines - a true first. 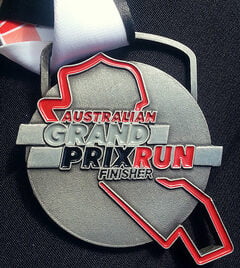 In 2011, inspired by Sidepodcast’s very own Christine, I started running. Eventually I could run 5km without stopping, so I ran a race, got a finishers medal, and then barely ran again for another 18 months. Once I started running again at the end of 2012 I realised I needed to keep setting new goals to ensure I kept getting out there. Then I got the February newsletter from the Australian Grand Prix and saw the Australian Grand Prix Run in the sidebar.

You've no doubt seen it by now, but it cannot be witnessed enough times. Pastor Maldonado was in his home country of Venezuela this past weekend to demo the F1 car to about 20,000 keen fans. With twelve laps on the programme, there was plenty of time for Pastor to soak up the atmosphere and make the most of time in front of the home fans. Unfortunately, he only managed to complete one lap before crashing on the next.

The great and good of Formula 1 descended on Russia this weekend, running promotional events ahead of the 2014 Grand Prix. Six teams in total took part, running demonstrations in both the country's capital city of Moscow and the location of the inaugural Russian Grand Prix, Sochi.

The journey to Silverstone on Friday evening could best be described as a fraught one. The UK was experiencing its annual bout of British Grand Prix weather, making conditions exceptionally treacherous. Several times during the expedition I yelled at my radio that the car was undrivable, alas no-one offered to red flag the road or put the event I was attending on hold. After several hours of somewhat intensive driving, I finally made it to Stowe School in Buckingham, although it had felt like I'd aquaplaned the majority of the distance 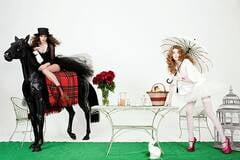 Lewis Hamilton and Jenson Button have been busy out of the car, teaming up for a Vodafone ad. They've been known to be put in unusual situations, setting up their tent for Glastonbury, or building their own McLaren car, but this is something beyond that.

During the lead up to the 2011 F1 season opener in Melbourne, Vodafone and McLaren flexed their marketing muscles to organise an F1/V8 driver swap day at the famous Mt Panorama circuit in Bathurst NSW. 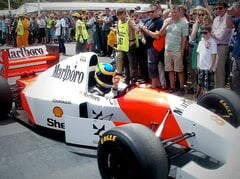 It's no secret that the Goodwood Festival of Speed is one of the best events for getting up close and personal with motorsport of all kinds. From drivers to teams to cars new and old, it's all within touching distance. I must admit, though, that I never thought it would allow this kind of access. Current F1 driver Bruno Senna took a handheld video camera with him as he raced down the hill, allowing us along for the ride. 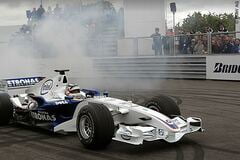 The BMW Pit Lane Park is descending upon the Trafford Centre in Manchester in July. But not at just any old time in July, the 4th, 5th and 6th. Hmm, sound familiar? That's because it's at the same time as the British Grand Prix.

As Christine pointed out on F1 Minute yesterday, Nick Heidfeld brought the BMW factory in Munich to a standstill when he turned up to thank employees for supporting the company's F1 programme.

Which controversial financial decision did Williams make on this day in 2011, changing the shape of the business?