For me, Abu Dhabi had all the ingredients a season finale needed. I was fizzing with excitement long before the lights went out and I’ve not really got down from that post-championship high since. Especially since (with one notable exception) everyone seemed to have such a happy end to the year. Watching the pure unadulterated joy and relief of Nico Rosberg and family, and indeed the whole of Mercedes, was enough to put a smile on my face 3000 miles away.

Although Lewis Hamilton took the official trophy in fine style at the final race of the year in Abu Dhabi, he was to be overshone in the end of season wrap up ratings here on Sidepodcast. Daniel Ricciardo, the chirpy Australian, took top honours when it comes to the performance of the year.

Season reviews are in vogue at the moment, and here at Sidepodcast, we handed the judging duties over to readers, asking you to rate the season as a whole. With five stars the best the season could score, we received over 100 votes before the polls closed. After totting up all the votes, the 2014 season scored a very respectable average of 3.91 out of 5 stars. You can divide that fourth star up however you like.

Every year, we ask for predictions from Sidepodcast readers, and 2014 saw a great batch of forecasts, suggestions, and just plain guessing about what was going to happen in the season still to come. As always, we don't let the predictions disappear into the ether, we drag them out, dust them off and highlight the good and the bad. Who was spot on and who couldn't have been wider of the mark?

After each and every Grand Prix during the 2014 season, we've asked you to give your rating for the event out of five stars - one for a very poor event, and five for the best that Formula One can offer. Now it's time to put it all together and rate the season as a whole. It's been a long year, but dig deep and cast your mind back to combine those early months with the tense championship finale, to come up with a season-long rating.

In order to produce my drivers' rankings (that combine ratings from across the board) it was necessary to analyse a lot of data, and rather than hiding behind my final rankings, this is going to be an explanation of where they came from and what the raw results are (before the rankings were generated). Some categories are relatively simple, whereas others are far less transparent, and I hope to be able to demonstrate where everything came from.

It is one thing to conduct an evaluation of drivers' performances over the season based on what we’ve seen, but what could be better than coming to conclusions based on analysis of the numbers? I looked at a set of seven different parameters that I feel I can objectively generate a rating for, with the aim to use these to rank the drivers from worst to first, on more than just World Driver Championship point totals.

With the 2013 season complete, we asked for your ratings - both the year in Formula One as a whole, and for the best driver of the last twelve months. Considering the highs and lows of the F1 season, the great start, the chaotic middle, and the less-thrilling finale, judging the year as a whole is a challenge.

Way back in March, we challenged Sidepodcast listeners to submit their predictions for the upcoming Formula One season. We had a great response, packaged together in a neat little megamix show, but I did, rather ominously, promise: "we will revisit this podcast in about nine months time, and see who was right!"

Having rated each individual race for nineteen separate weekends, it's time to combine your scores and judge the season as a whole. With so much occurring in the space of nine short months, the Australian Grand Prix feels a long, long time ago. But cast your mind back, and pass judgement on 2013 and how it stacked up for you.

At the beginning of the year, Sidepodcast listeners called in with their predictions for the upcoming season. Taking a good, hard look at each team, each driver, and how the overall year would roll, nine plucky F1 fans submitted their guesses at what the 2012 season would hold. Ten months later, it's time to take a look back and see who said what, which bits were right, and which were hilariously wrong. We always promise to revisit these things, and this is that moment.

Among the Formula 1 teams that debuted in 2010, Caterham not only became the strongest one but also maybe the most popular. Caterham is also different from the others because they promise results, and he who promises, must deliver. They have a bigger budget, they have Mike Gascoyne, and their owner Tony Fernandes is a well respected businessman and leader. They are the only new team to have a grand prix winner as a driver (Heikki Kovalainen). Their promise in this case is to join the midfield. 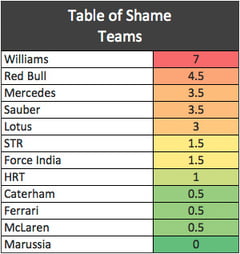 Amongst other things, like a triple world champion, a return to the good old USA, and the final departure of some bloke named Schumacher, the 2012 F1 season will be remember for the lively debate on how some drivers seemed to be magnetically attracted to others. In simple terms some drivers got a heck of a lot of stick this season for crashing, a lot.

Daniel's Day Out was invented from an off-hand comment made during one of the F1 Debrief shows in 2011. Seeing that Paul di Resta had Paul's Performance Report, I thought that it would only be fair for the other Formula 1 rookies to have their own one-word reviews as well. Christine had mentioned the title 'Daniel's Day Out' during the podcast and that was all I needed to want to help out.

2011 is rapidly drawing to a close, and there is just time to look back on the season past before attention turns fully to launches, pre-season testing, and the adventures that 2012 will bring. As promised in the last F1 Debrief show, this is our wrap-up of the season - a compilation of the rate the race posts throughout the year.

Paul di Resta has this week been confirmed at Force India for next year, gaining a second season with the team after a strong and consistent performance during his rookie year in 2011.As a dedicated Paul di Resta fan, Steven Roy had faith in his driver from the start, and provided us with a one word summary of each race weekend this season. Now that the year is drawing to a close, a compilation of the words shows us just why Force India have chosen to re-sign the young Scot.

The news that Jaime Alguersuari and Sébastien Buemi have been booted from Toro Rosso is both a shock and actually not really a surprise at all. For the majority of the 2011 season, we were speculating which would be given the chop from the team as results swung this way and that. Towards the end of the year, the top bosses at Toro Rosso stopped being so harsh on their drivers and that may be why we thought they were safe.

As I’m sure you’re more than aware by now, we already have a World Champion crowned in Sebastian Vettel as we go into the final race of the season. If you’re not aware then, well, surprise! The general perception going into these races following Vettel and Red Bull’s championship victory is that these races no longer seem to matter. Whilst their lack of championship victory value is correct, there’s still plenty to race for and, more relevant to us, plenty to watch for.

Having reviewed how well we got on with our 2010 Resolutions, it's time to take a look at the predictions we made at the beginning of the year and see how very right and/or wrong we were. I hate making predictions, as is well documented on the site, but even I had a go ahead of the 2010 season - attempting to second-guess the future. As ever, I fell woefully short of success.

As you may know, at the of every season the FIA wraps up all of it's motorsport and whatnot with a grand old event known as the FIA Gala. This very formal event is seen as the absolute finale of the year's motorsport, celebrating champions from the likes of Formula 1 and World Rally Championship and politely applauding them whilst wearing a very expensive tuxedo. I assume owning a tuxedo is not just the only requirement of attending this event but nevertheless, the audience are treated as well with a season review video from the FIA that is always something to check out