Mike Hewland died at the weekend aged 89. He and his company should be known to all motor racing fans but they remain virtually unknown. Everyone knows that from the end of the 1960s, all through the 70s and into the 80s that the majority of the cars on the F1 grid had Ford Cosworth DFV engines. What is not as well known is that each of these engines was mated to a Hewland gearbox.

Group Lotus issued a blistering attack on motor sport media luminaries, bloggers, tweeters and more this afternoon in what must count as one of the least professional press releases any company has ever sanctioned. The publication fires personal attacks at Tony Fernandes, Mike Gascoyne and Joe Saward, before spilling sensitive details about the company's current (lack of) involvement in Formula 1.

I've been thinking about the way Bernie Ecclestone runs his business. He may have a succession plan in mind but if he has, it is something that has been kept a closely guarded secret. The name of Zak Brown has been whispered about, an ex-driver and F1's current marketing specialist. Bernie's grip on F1 is something that will last as long as he lives, but when he is ready and/or forced to step down, what then? I've given it a modicum of thought and believe I have some potential replacements to lead Formula One in a post-Bernie era. 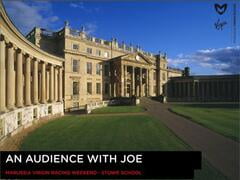 It has been far too long since F1 journalist Joe Saward pitched up in the UK to discuss all matters relating to Formula 1. Thankfully he's planning to put the situation right, as his globetrotting Audience With.. social networking event returns to the UK ahead of the British Grand Prix.

I will openly admit to being a fan of singer/songwriter Jacques Villeneuve. I never liked his driving, but I do own a copy of his debut album Private Paradise and was secretly really pleased when we were able to feature his music in a video some time ago. 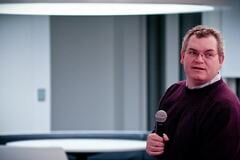 Joe is hosting a second Audience with Joe event in the UK this coming Friday, 9 July. This time around the venue is the Plum Park Hotel near Silverstone, an ideal location for anyone at a loose end after attending F1 Free Practice earlier in the day.

Guest writer Jeremy laments the disappearance of a top name in the sport, but ponders whether he may be coming back. 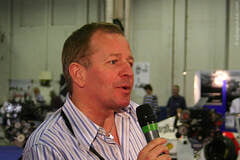 Martin Brundle has stepped up to the plate and showed he’s not willing to sit quietly while the FIA take yet more liberties as motorsport’s governing body.

Which FOTA plan, to save money pre-season, was revealed on this day, although was scrapped before the month end?