Filed under New and Notable

The final month of the 2012 Formula One season saw some thrilling races, a podcast here or there, some guest posting and a couple of new ideas. We're happy the off-season is here but we like to think we sent the season off in style.

This month has been a spectacular one - where Formula One hasn't always been delivering the most action packed races, we've been getting our entertainment wherever we can. Red Bull provided more excitement than just Sebastian Vettel dominating everything he turned his hand to, by sending a man to jump out of space and land on his feet. Good times!

After a cool and calm August, the Formula One season ramped up the action again for the Belgian Grand Prix, and heads into a crammed final couple of months. For Sidepodcast, we're really starting to make progress on the site and things are starting to fall into place. Unfortunately, the audio side of things is suffering - as both of us had colds towards the end of the month - but we will try again in October!

With Formula One taking a much-needed but rather extended break in August, there was time for us here at Sidepodcast to sit back and take stock of how things were going in 2012. Did we do that? No chance! Development continued apace, the guest posts came flooding in, and we ramped up the community activities to help keep ourselves entertained. With no races, let's go straight to what happened site-wise last month.

After a slow month in June on the podcasting front, we hit the ground running in July with live streams ahoy. We almost would have made it four Friday shows in a row if it wasn't for me and my Olympics obsession. Oh yes, with F1 taking it's summer break, we're all about the track and field sports now. However, that's probably something we'll hint upon in the August recap, for now it is all about what we've achieved in the month just gone. 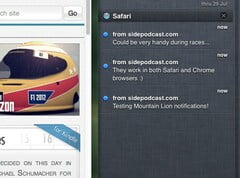 Frequent commenters on Sidepodcast will likely be aware of the pop-up alert functionality we added over two years ago. The simple visual notification system enables users to follow conversations across the site while browsing other tabs or using another application entirely. This week, thanks to a new operating system, commenting got a bit more interesting.

This month Sidepodcast has been spreading its wings and following several different sports including F1 - sometimes all at the same time. We had an epic weekend of following IndyCar, Le Mans and some football. Mr C is proud to say he commented in all three threads at the same time. An odd achievement, I'm sure you'll agree. We've not deviated too far from the path though, with F1 getting some great coverage through the Featured articles, plus some interesting posts from both of us and guests alike. Here's how the month unfolded on the site.

There had been the nucleus of an idea bouncing around inside our heads for the past three or four years that until recently we had failed to bring to fruition.

There is only so much two people can achieve when working on a part-time hobby such as Sidepodcast, and in order to achieve what we wanted, we figured regular content updates would naturally decrease. What we didn't account for though was how truly prolific the F1 community can be.

For as long as I can remember, I've been maintaining a page on the About section of Sidepodcast called A Potted History. Monthly updates cover the new and exciting things that the website, podcasts, or community have been doing, providing a great history of how the Sidepodworld has developed. With the site now taking the shape we've been working on for months, a new addition to the Potted History feature is the corresponding blog post.

This weekend, we introduced a new style of event - the Sidepodcast Hangout. As per usual, in our highly disorganised manner, we rolled the event out in a mysterious and secretive fashion, testing the waters to see how it would go. Looking back on it now, I think it was a success, I hope those that took part think so too.

This year's NAB Show 2012 provided six days of welcome distraction from the fallout of F1's visit to Bahrain. Always a highlight of my year, the most recent NAB offered up a wealth of exciting new products, technologies and ideas that conspired to put live shows back on our agenda.

Ahead of the 2012 Formula 1 season, we are launching a brand new section on Sidepodcast, created to allow in-depth and expansive content to shine through on a regular basis. Unlike existing posts such as this one, Features will deliver a known level of content on an expected date. You might equate a feature to that of a column found in a traditional magazine.

As some of you may know, Pat W. has been running a multi-series motor-racing prediction game on his Too Much Racing blog for the last two years. Following his decision to drop the Too Much Racing Game this season, I have volunteered to provide the direct replacement to be known as The Motor Racing Game, because it would be such a shame to lose such a great game.

Welcome to the all new live commenting system from Sidepodcast. Today's release needs a little testing and this is the place to do. Help us out by leaving a comment and providing feedback.

This year the Formula 1 season has been drawn out until the end of November, which while brilliantly offering fans ever more track action, has cut into our off-season development time. To that end we've cheekily stolen a few weeks back from calendar organisers and begun tearing this site to pieces in anticipation of the 2012 season. The first noticeable change to take affect is the archival of the recently retired Daily posts.

Some of the regular Sidepodcast commenters have decided to use their creative energies and have created a 'home of random'. We thought we'd try to nurture a place where we could continue the off-topic conversation and share the odd link, funny discoveries and assorted gems of the digital era. That's as much of an agenda that there is at the moment, it's definitely a work in progress and it is expected to change according to the needs, feedback and ideas of the people that read and use it. Despite being a relative newcomer to the social scene, the Sidepodcast community has taken Google+ to their collective bosom. While there is still plenty of active conversation continuing on both Facebook and Twitter, the momentum is definitely favouring G+ right now.

Sidepodcast has been producing race previews for a number of years. The posts are a popular resource and can often be packed with lots of detailed (and depending on your interests, potentially rather dull) data. We've been looking at improving the readability of these posts and hoping to make the content more visual and instantly accessible. 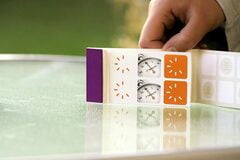 Since our brand new F1Minute stickers made their debut at the Goodwood Festival of Speed in July, people have been keen to get their hands on them. Finally, having had chance to catch our breath during this all too short summer break, we're now able to offer stickers to anyone who wants them.