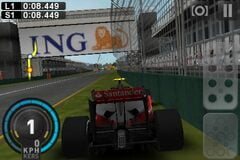 Codemasters have managed to sneak a mobile version of their 2009 Wii game into the crowded Apple iPhone marketplace, just in time for Christmas. There was almost no hype, nor expectation surrounding this release, so retailing at £3.99 in the UK, how does it stack up to it's bigger Wii cousin?

Despite only getting his hands on the game earlier today, Lukeh has put the hours in and is ready to present us with a review of his first impressions of the new Formula 1 2009 game for the Wii.

It's been a long time since F1 fans had a decent console game to play, and I know it has been a topic of conversation in the comments for the last few months. Codemasters have taken up the daunting task of providing a realistic racing title that will satisfy gamers and fans alike. Still, from what we've seen so far, they look like they're doing a good job.

If you cast your mind all the way back to the end of January, you may remember we made a trip to the Porsche Human Performance Centre and met a chap called Mike Garth. At the time he mentioned he'd just finished working on a television show that attempted to discover a real life racing talent from a collection of bedroom gamers.