Despite the fact that it is obvious to practically everyone that this race should not happen it still appears that it will take place. Even previous apologists like Damon Hill have woken up and smelled the coffee and gone public with the view that the only sensible thing to do is for F1 not to go to Bahrain this year.

With the FIA Commission's meeting in Geneva this week, it appears that at least one of the big rivalry/wars in Formula One is over. The Lotus versus Lotus battle will be coming to an end. After spending the entire year locking horns, with both sides adamant that they deserve the name, it was something of an anti-climax. 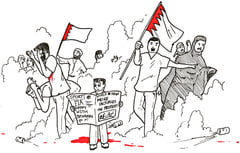 The FIA takes its apolitical position very seriously. When Turkey tried to use the weight of the Istanbul Grand Prix to give credence to the almost completely unrecognised state of Turkish Cyprus, the FIA slammed Turkey with a $5M fine - a kick in the wallet so hard that the organisers had to sell the race to Bernie just to carry on.

Here at Sidepodcast, Christine and I had written off any chance of Formula 1 returning to Bahrain in 2011 way back in February of this year. The fact that the FIA repeatedly gave the country an ever more elastic deadline to sort out their affairs was the source of a certain amount of concern but we assumed (wrongly) that common sense would prevail and that the 2011 F1 season would comprise just 19 races.

Flavio Briatore won his court case against the FIA on Tuesday. The former boss of the Renault F1 Team had a lifetime ban imposed by motorsport's governing body last September, but today that was overturned by a French court. Citing 'irregularities' in the FIA's decision, the court awarded Briatore 15,000 euros in compensation.

Earlier today, the Guardian newspaper ran a story claiming Flavio Briatore accused Max Mosley of being "blinded by desire for revenge". The information appears to have come from leaked documents, and predictably the FIA aren't happy about it.

After 16 years in power, today is Max Mosley's final day as president of motor-racing's governing body, the FIA. By the close of play, either Jean Todt or Ari Vatanen will have succeeded him.

The dreaded FIA elections are drawing closer, and Lukeh has resurrected his video, in support of Ari Vatanen. Here, he explains why he made the video, and the reasons behind his choice of candidate.

Today is the day for Renault, then, as they face charges of throwing the Singapore race in favour of Alonso. Renault have already said they aren't contesting the charges, so the only real question is what punishment the FIA will dish out.

The ongoing Renault saga now focuses in on head of engineering Pat Symonds, who has reportedly been offered immunity by the FIA if he answers some questions. A steward's report seems to hint he knows too much.

Sir Jackie Stewart has told Autosport that he was asked by someone within the F1 paddock to run for the FIA Presidency, but he decided against it.

The war of words continues as the Renault saga rumbles onwards. Now it seems that Flavio Briatore wrote a letter to Piquet Sr just a couple of days after the FIA were given the "new information".

It looks as though Vatanen's campaign for head of the FIA has received a bit of a boost as several clubs from various countries have pledged their support. Apparently, 14 clubs have declared their views and they are urging others to do the same.

AUTOSPORT have uncovered some more details surrounding the upcoming Renault hearing, particularly noting where the new information has come from.

The ING Renault F1 team have been summoned to appear before the World Motor Sport Council in Paris on the 21st September.

This summer break has yet to be the peaceful few weeks off we desired, and now the FIA have thrown another interesting piece of news into the melting pot.

The Formula One Teams' Association has announced that it is setting up a breakaway championship. Eight of the current Formula One teams met up at the Renault factory in Enstone and concluded that enough was enough, it's time to do things their own way.

Today could be a huge day for Formula One. One of those events that gets recorded in the history books for all time. Equally, it could be a day of few surprises, one that is merely another stage in the political war that has completely engulfed F1 recently.

It all happened much quicker than we'd anticipated, but McLaren's hearing has been and gone and the result is in. The FIA have handed out a suspended three-race ban, with the charge being that old favourite bringing the sport into disrepute. The suspended ban essentially means that McLaren are free to go but if there are any more dismeanours in the next 12 months, then it could be brought into force.