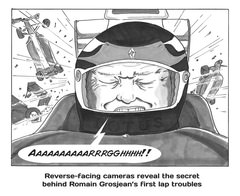 Sidepodcast's resident illustrator returns with more behind the scenes sneak peeks of what goes on at Suzuka when you're not looking.

The brilliant and always original Stuart Taylor has been creating fabulous illustrations for Sidepodcast as far back as 2009. This week, he kindly filmed the creative process from basic ideas and sketches to the digitising and captioning the end result.

Stuart returns to uncover the stories behind the stories after a weekend of late night racing action in Singapore. 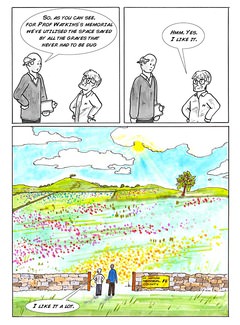 The Formula One world said goodbye to a much-loved and influential member of the fraternity, with Sid Watkins passing away at the age of 84. Here, Stuart returns to share the inside story of the best way to pay tribute to everyone's favourite Prof. 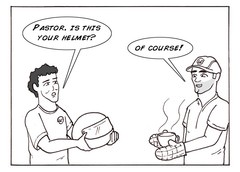 With so many dangers present in and around motor sport, Formula One drivers these days can never be too careful. In order to gain more insight, Stuart Taylor uncovers some of the attention and care that goes on behind the scenes. 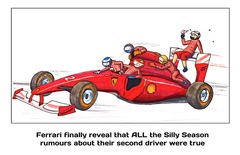 While the F1 stars and their unreasonably priced cars are busy taking a week or four off, our favourite Grand Prix satirist returns to support you through the difficult period of enforced hibernation. 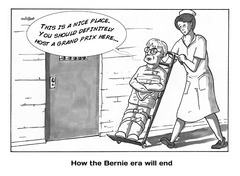 Stuart sifts through the post race technical reports once more, to clear up all those all important Formula One questions. 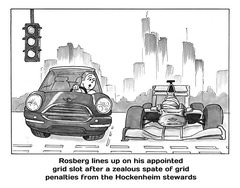 Stuart Taylor lifts the lid on a few of the events you may have missed during this year's German Grand Prix. 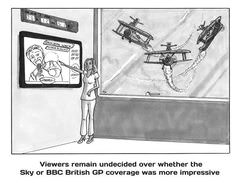 Inspired by events at the British Grand Prix, Stuart Taylor shares more cartoons that look behind the curtain of our beloved sport. 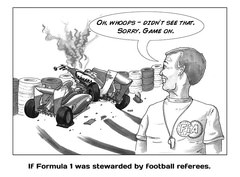 Putting pen to paper once more, Stuart Taylor offers up an alternate view of the past weekend's Formula 1 activity in Valencia. Pow!

Stuart Taylor casts a satirical eye over a fortnight of F1 silliness, as he reveals everything you never knew you didn't know about what didn't go down in Canada last weekend. 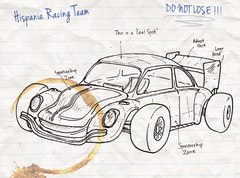 So the 2012 pre-season test frenzy is over and we've all had a good look at the new cars. But if you think the cars we saw in Barcelona will be the same models we see at the first race in Melbourne, then you are naive indeed! In fact, the teams are all working endlessly back at the factories to manufacture the final development parts in order to have the best possible chassis for the season ahead. 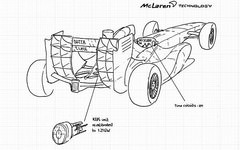 Unfortunately for the Woking Team, their development been so hectic that they have been somewhat careless with their documents. Now, the blueprints for a massive upgrade to Jenson Button's car have been leaked to sad people in internet chatrooms.

Hey guys, did you hear that Sky have stolen our beloved F1? So now, if you don't have Sky Sports, you have to pay £20 (£30 HD) a month to keep up with the sport we know and love. I say, boo to that! I can't afford that kind of cash and neither can a bunch of you guys, I'd wager. But the Sidepodcast community is so awesome, we can't just let disband, so here are some other ideas. 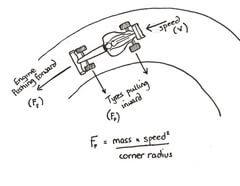 In the last couple of Sidepodcast Debrief shows, Mr C has made a point of asking why can’t engineers/regulators make cars that work in the rain when he can drive his car perfectly fine when storms are a-brewing? Whether or not Mr C was just being cheeky, this is a probably a good time to explore the mechanics of the difficulties in racing in the rain. There will be some maths and a little bit of physics, but I’ll keep it light and we’ll all get through this together, I promise!

2011 is giving us great racing at the expense of a predictable championship, whereas the exciting championship of 2010 came with races so predictable that Sidepodcast nearly had to rename itself 'Side', such was their lack of enthusiasm for audio blogging. But which is better for the sport: the races of the championships? 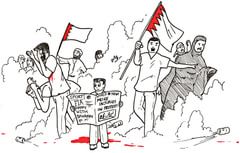 The FIA takes its apolitical position very seriously. When Turkey tried to use the weight of the Istanbul Grand Prix to give credence to the almost completely unrecognised state of Turkish Cyprus, the FIA slammed Turkey with a $5M fine - a kick in the wallet so hard that the organisers had to sell the race to Bernie just to carry on.

Following the news that the BBC will be downsizing their Formula 1 line up for 2011, Chain Bear can exclusively reveal how the UK broadcaster plans to overcome difficulties caused by the doubling up of duties.

Inspired by the excellent Autobiography of Formula One (a book, which, if you haven't got it already, oh my goodness you need to get it right now. Stop reading this post and get it), I have compiled together the story of the season told only in quotes from F1 personnel (and some journalists). It's a bit lengthy but doesn't take too long to read as they are only a sentence each, really. It was fun to do! 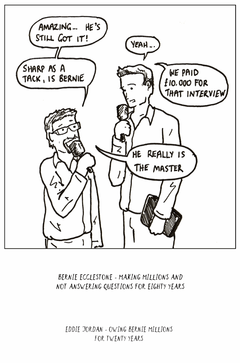 This week marked the 80th birthday of one Bernie Ecclestone, and to celebrate the occasion, Stuart Taylor of the inimitable Chain Bear has been giving the event some thought.

Which driver secured his first podium on this day in '94, after being drafted in to replace an injured teammate?