We were hoping, with McLaren free from Mercedes (and title sponsors!) that it would jazz up its livery: perhaps its rekindled relationship with Honda would bring back its Marlboro colours; after all, Lotus were all too happy to use completely irrelevant cigarette branding for its renaissance! Some of us even hoped it would return to its roots - the dazzling orange of the Brucey days. But no: with Dennis the entirely Unmenaced in charge we got grey. And black.

We’re all looking forward to the new Formula One season and can’t wait to see what excitement it will bring. But for those of you who just can’t wait any longer to see how it’ll play out - you’re in luck! I just so happened to be vacationing to Hill Valley and spotted a time-travelling, flying DeLorean. I know! Weird, right? I may have borrowed it and skipped ahead in time a little to report back on exactly how the 2015 season unfolds.

If you thought there was enough drama surrounding the antics at the US Grand Prix, you're in for a treat. Fresh from Austin, these paddock postcards have arrived to give us greater insight into just what went down in Texas this weekend. From the mysterious problems that Vettel has been experiencing, to finding out the truth of whether Kimi only cares about racing, there's a little bit of insight for everyone.

To gear up for the final two races of the season, we've got a behind-the-scenes peek at the action from Yas Marina. The Abu Dhabi Grand Prix wasn't a classic, but once you know what was really going on in the desert, the weekend becomes a hundred times more interesting. This time, the stewards are kept busy, Kimi Räikkönen bids a quiet farewell, and the fans point to where the real action is happening.

After the Japanese and Indian Grand Prix, the paddock postcards are more important than ever - speculation is everywhere and the driver market is wide open. This fresh batch gives us a bit of insight into how the media handles these situations, some of the extra challenges presented at the Indian race, and a bonus challenge for viewers.

Fresh from the Korean International Circuit, a handful of postcards have arrived, giving the inside story of the race - all the little things that would normally escape the F1 fan's notice. This time, how Nico Hülkenberg managed to score such a great result, and what the regulations for current F1 would be like if they were imposed on a previous era. All that and more in this week's paddock postcards.

F1 teams and drivers are moving on to the next race in Korea, but before they get there, we just have time to take a sneak peek behind the scenes of the action in Singapore. As Formula One's only night race, the Singapore weekend has plenty on offer, including an insight into the second career of a Sauber driver, what Mark Webber really wants to be doing out on track, plus a staunch competitor in the other car for Fernando Alonso next season.

Unfortunately for fans of competitive racing, that boy Sebastian Vettel has only gone and run off with the championship again. Even his boyish yelps and Mario-esque ‘woohoo’s over the victory lap cannot hope to cover the snores from our armchairs and the boos from the crowds. Here at Sidepodcast, a great number of the commenters have chanted, ‘anyone but Vettel’: perhaps the only thing most of us can agree on! But where would we be if our dreams were answered, Frank Capra style, and Vettel was erased from history?

If you felt like you were missing something at this weekend's race in Monza, then these behind-the-scenes postcards will clear everything up! Featuring a brief look at the initiation into life at Red Bull, the ongoing financial troubles at Sauber and the real reason we saw glimpses of thermo-cam during the race weekend.

There was one topic of conversation dominating the summer break from F1, but with the racing back in full flow at Spa, a whole raft of new inside information has come our way. From the difficulties Mark Webber has in keeping a secret, to the correct pronunciation of a key part of an F1 car, there is plenty of behind the scenes gossip to be encountered in this latest batch of postcards.

Back in multi-coloured glory, a set of postcard secrets from behind the scenes at the Hungarian Grand Prix. From a summary of the season as it has unfolded so far, to the unexpected consequences unleashed by the sudden ban on all media in the pit lane. We also get two sneaky peeks at some unusual successes, and a stressed out pit wall.

A bumper crop of top-secret behind-the-scenes postcards reached us from the Britain and Germany back-to-back Formula One races, including more information on the 600th GP celebrations at Williams, a broadcasting tip for Sky Sports and a look at the troubles facing Paul di Resta at this stage of his Force India career.

The International Tribunal meet this week to discuss the tyre test that Mercedes and Pirelli completed earlier this year, and we eagerly await their decision. However, if you're not entirely sure what the fuss is about, here's a handy guide to what happened and why some teams have been complaining about it.

Monaco was an action-packed race weekend, full of incident and intrigue, but there are a couple of things you may have missed. It's time to take a look at how some of the drivers make their way home, Bernie's private thoughts, and who is missing out with all the attention focused on those pesky Pirelli tyres.

The fallout from the Spanish Grand Prix continues to rumble, but here are collected some of the notable events that may not have made the headlines. A sneak peek at Vettel off-duty, the on-going speculation over Hamilton's switch to Mercedes, and a glance at the future for McLaren and Jenson Button.

Bahrain delivered some top notch racing, but once again, it was how the drivers related to each other that got the most headlines. Here, we go behind the scenes of the Bahrain Grand Prix, with a look at what is really going on in the stewarding office, a potential scenario from next season, and a brand new Formula One movie.

There's been plenty of debate about the quality of the racing in Shanghai, but if you want a closer look at what was really going on in China, then you've come to the right place. From a peek inside the Red Bull facilities, to the real reason Kimi Räikkönen performed so well despite having a damaged car, there's a little bit of everything in these snapshots from the last race weekend.

A choice selection of F1 postcards following the Malaysian Grand Prix. Including a behind the scenes peek at Vettel's apology to Webber, the real reason Force India had to retire, Ferrari's aesthetic approach, plus Lewis Hamilton and his shadow make a pitstop. All the gossip from Sepang that insiders didn't want you to know!

Straight from the non-stop (except for when it rained a bit) action in Melbourne comes a selection of secret postcards, collected together and displayed here for your enjoyment. From the motivation behind Sutil's surge to the front of the field, to a behind the scenes look at Kimi's winning strategy, all the gossip from Albert Park the teams didn't want you to know is revealed here. 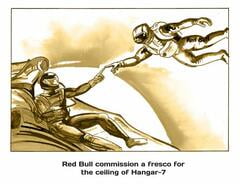 If you thought you spotted every little thing that happened in Korea, you'd be wrong, as the marvellous Stuart Taylor returns to give some additional insight.