By now you would think that a new F1 game being released wouldn't necessarily come with much excitement considering the yearly schedule that the games have. Much like FIFA or Madden we see a new game come out from the experienced hands of Codemasters every summer or autumn, and they are now in the seventh iteration of their yearly updates.

When it comes to running an F1 team I imagine that there's quite a lot to do. First there's getting an engine to actually power your cars, and not to forget the hundreds of people that work on said engine and chassis to make them work as well as possible. There are sponsors to appease too and plenty to do with promotional work to get that sweet money in. Don't forget the babysitting of drivers too, and even more so now with social media being so important to get the fan's conspiracy theories across. Wait - the catering too! How could I possible forget about the catering?

As we know Formula 1 is going through somewhat of an identity crisis right now in how it views qualifying. We seem to be stuck in an endless loop of a nothingness orchestra being composed by a cacophony of idiots at the very top, and unsurprisingly that is becoming tiresome for the fans such as ourselves to watch.

As Formula 1 fans we are all privy to a bit of controversy that is always created by the many chefs spoiling the broth. It's a common occurrence and it feels very rare to have a season where some kind of scandal or outrage or downright disaster is taking place that will no doubt end up in journalists using every hyperbole under the sun. I mean, Formula 1 has been on the brink of apocalypse so many times that Bruce Willis has now blocked the paddock's many numbers on his phone. So I feel that it's only fair that we prepare ourselves by predicting what disasters we shall encounter in 2016.

Formula 1 seems to be in a bit of a dodgy place right now. A lot of people are talking of crisis, the teams are looking to the future way ahead instead of trying to support those struggling in the current and the ongoing discussions of costs, changes and rules continues to jump back and forth as always. Yet what seems to have sparked quite a response as of late is the news that drivers will no longer be able to switch helmet designs from race to race during the season - a decision that is so supposedly minor for so many people yet has created a heck of a response.

Now I know what you're thinking. You come onto Sidepodcast, you see something about the name Frank, you expect something about French greatness. Whilst there is no disputing Mr Montagny's greatness it is instead another Frank that we need to discuss after the 2014 F1 season – a certain Sir Frank Williams and the epic resurgence of a team that Formula 1 should always have near the top.

In just a few weeks the FIA will begin an exciting new crusade for electric motorsport with the debut of Formula E, the much anticipated series that looks set to shake up what we know of open wheel racing. There's been a considerable amount of talk and hype over the last year or so, gradually building up as we approach the first race in Beijing on 13th September, and this week saw the final test session at Donington Park being held before the big series debut. Having attended this sunny day in the East Midlands, it led me to quite a few thoughts on Formula E and what's to come.

It's the penultimate race of the season and what a place to be racing as IndyCar emanates from the hilly surroundings of Sonoma. Will Power has put himself in an excellent position to solidify himself as championship leader with a strong qualifying to be sitting on pole for tonight's race in a dramatic session. His rivals, Castroneves and Pagenaud, sit in 6th and 15th respectively but the wonderfully variable up and downs of Sonoma's layout could easily mean anything could happen. With just the final 7 days of the 2014 championship remaining, can Will Power use his willpower to power his way and be willing to win the drivers championship?!

In a resurgence of recent weeks that has slightly come out of nowhere, Sebastian 'Not Franck' Bourdais starts on pole once again just weeks after his pole-to-victory race in the streets of Toronto. Amazingly this now puts the Frenchman on a tie with Dario Franchitti on open wheel poles. Maybe it's the rain that gets him going but the twisty turns of the Mid-Ohio circuit but it was a disruptive qualifying session with a few stoppages and lots of incidents. Helio Castroneves and Scott Dixon start way down the order in 15th and 22nd. It's a mixed up order and it should make for a fantastic race.

In a yearly tradition now, the next instalment of Codemasters’ successful F1 games has finally been announced under the name F1 2014 as I'm sure you’ll be surprised to find out. What is unexpected perhaps is the news that Codemasters have opted out of releasing F1 2014 on the next generation of consoles – it’ll only be PC, Xbox 360 and PS3 again. That being said, it’s not all bad news as a PS4 and Xbox One version will be released in correlation with the 2015 season.

As if the last weekends of IndyCar haven't been enough for you, why not have two races over this weekend in the streets of Toronto to bring you even more racing?! There's been a whole range of winners this season with the likes of Mike Conway and Carlos Huertas getting surprise win in amongst the likes of Power, Pagenaud and Hunter-Reay, and it'll be a good chance for RHR to capitalise on a smart victory amongst the yellows of Iowa last weekend. However, one man who'll be looking to get on form in Toronto will be Scott Dixon - he's done it before and with a race on both Saturday and Sunday it could be a great opportunity to get his Championship challenge back on track.

Just a week after two excellent races through the streets of Houston we move onto the raceway of Pocono, a track with it's future in doubt and I'm sure will be hoping for a good race to reassure fans and organisers to come back in the future. The championship is still very much in Will Power's hands but it's all very close with Castroneves, Hunter-Reay and Paganaud all close behind. After a few races on streets and circuits it's good to be back on an oval so here's to a good 500 miles worth of racing on a circuit that really needs it right now!

As if there wasn't enough amazing entertainment this weekend in the live comments here, we're being absolutely spoilt with two races from IndyCar as the Grand Prix of Houston takes place once again. Practice may have had red flags here, there and everywhere and drivers may have been practising standing starts once again but it's Will Power who will be looking to pick up after the three week break and continue his championship lead into the latter half of the season, With two races this weekend there's a whole heap of points for the likes of Ryan Hunter-Reay and Helio Castroneves to catch up with. Let's hope for two clean exciting races through the streets of Texas!

Just a week after a double trouble set of races in Detroit that saw Helio Castroneves and Will Power going ahead with a set of victories we move onto the Firestone 600 set at the Texas Motor Speedway. Ryan Hunter-Reay will be looking to regain his championship lead after a shocking set of races in Detroit but it'll be a long 200+ gap race over the 600 miles in Texas that will decide who will be taking an advantage in the championship 8 races into the season.

After an exhilarating 500 miles that would make The Proclaimers sweat, Detroit hosts the first double header of the 2014 Indy Car championship with a race both on Saturday and Sunday through the streets of the motor city. Both Helio Castroneves and Ryan Hunter-Reay battled it out within 0.006 seconds of each other at Indy but, after winning his first race at Detroit last season, Simon Pagenaud will be looking to capitalise on his Indy GP win before the 500. This double header will provide the field a solid chance to close the gap on the leaders at the top with two races to try and win. It should be an excellent weekend! 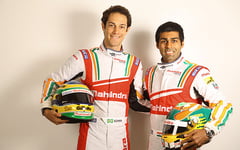 It's now just over 3 months until the grand debut of Formula E and it's a matter of time before we finally know whom will be gracing the 20 man grid across 10 different teams on that first race in Beijing. Build up is always an exciting thing really - when you think about the build up to Monaco in F1, the build up to Le Mans, the build up to Indy 500 and so forth - it's all part of the package of an exciting event that promises great things.

It wouldn't be May without IndyCar's month of Indy 500 buildup and the big moment is here - it's the 98th running of the Indy 500 and much like last year we see Ed Carpenter sitting up top on pole with close competitors all around him. Last year's popular winner Tony Kanaan starts in 16th whilst big name entrants like Kurt Busch starts in 10th and former F1 world champion and Indy 500 winner Jacques Villeneuve starts in 27th out of 33 entrants. It's going to be a fantastic few hours of racing - make sure you don't miss it!

It's a very special weekend for IndyCar as it's the Grand Prix of Indianapolis, the first infield IndyCar race at the fabled Indianapolis circuit. Acting as a build up for the Indy 500 at the end of May, the old F1 track has been modified from the fairly rubbish layout it used to be to a fast flowing track that lots are looking forward to. The big surprise in qualifying was the pole for Sebastian Saavedra and Jack Hawksworth joining him on the front role, a huge coup for the rookie! It should be an exciting race for those watching!

It's race 3 of the 2014 Indy Car championship and it's time to return to Barber Motorsports Park in the ever-so-cliche sweet home Alabama. Long Beach brought utter and absolute chaos on the track with a few classic Indy Car moments, just not so much classic for the right reasons unfortunately! It did, however, lead to the unexpected victory of Mike Conway, but I'm sure last year's winner of this race Ryan Hunter-Reay will be looking to get back on track (get it?) and return to winning ways here!