The calendar for the 2012 Formula One season was ratified by the FIA this week and confirmed that it will be a 20 race season, starting in March and ending in November much like the 2011 season. So that is next season sorted (although with doubts over the Bahrain and US races), what does the future hold? Which circuits will come and which will go? In this post I have made the assumption, based on persisting rumours, that the Belgium and French races will alternate from 2012 onwards. 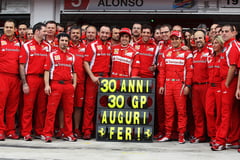 Today the 29th July 2011 is the 30th Birthday of Fernando Alonso and just over 10 years ago he was a fresh faced youngster in his first season of Formula One with it all to prove. This post takes a quick look at his Formula 1 career so far including the highlights and of course the lowlights as it hasn’t been all plain sailing for the Spaniard. The 2010 Formula One Season is almost at an end, two races remain in Brazil and Abu Dhabi and 5 drivers remain in contention, some in better positions than others, to become champion. The result of the poll carried out in August when 7 races remained showed that 51% of those who voted believed that Mark Webber would be champion, followed by Lewis Hamilton (21%), Fernando Alonso (14%), Sebastian Vettel (8%) and Jenson Button (4%) As Formula One heads to Spa Francorchamps this weekend five drivers are all within striking distance of winning the 2010 World Drivers’ Championship with only 20 points separating the leader and the driver in 5th. With seven races remaining and a maximum of 175 points available any one of the five could become champion.

Formula One seems to be the last sport to embrace High Definition. In America Nascar is broadcast in the format and MotoGP is being broadcast in HD this year with them looking into using 3D technology in the future. In the UK there are now numerous High Definition channels, Sky Sports broadcast their content across 4 HD channels, with the BBC and ITV making moves to embrace HD. The World Cup this year has been broadcast in HD and in the UK at least by 2012 it is hoped that everyone in the UK will be able to watch the Olympics in HD.