So here we are! We've made it to the end of the season, and more importantly, Alex has. His mission to attend every single Grand Prix this year has been an outstanding success, and he's became a regular in the paddock - making friends with teams, and getting his name up in lights! We've got just one more race to look at, and then, quite frankly, I don't know what we're going to do with ourselves. Can you do it again next year, please Alex?

Hello there, thank you for joining me once again as we head into the home stretch of Alex Snell's incredible journey around the globe, attending every single Grand Prix in 2010. The season itself is over, but we've got just three races to recap on. With such highs already in the adventure, what else can Alex get up to? If you'd like to read more from Alex, visit his travel blog, or get up to the minute updates on his Twitter account. Now, over to Alex. 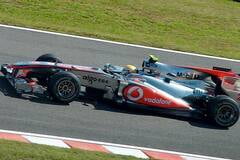 Welcome along, we are back with another double race update from the fabulous Alex Snell, who is following the F1 calendar and visiting every single Grand Prix in 2010. We're more than halfway through, now, and Alex has become a bit of a household name in the paddock, gaining insight that he could only have dreamed of at the start of the year. If you'd like to read more from Alex, visit his travel blog, or get up to the minute updates on his Twitter account. Now, over to Alex.

Hello, welcome, we are here to recap another two races from the ground via Alex Snell, who has been travelling around the globe to take in each and every F1 weekend. Alex is pretty famous in the paddock now, and has made some good friends at Virgin Racing, but even so, he still watches and enjoys the races just like any other fan would. If you'd like to read more from Alex, visit his travel blog, or get up to the minute updates on his Twitter account. For now, it's over to Alex.

Alex has been faithfully travelling across the globe on his epic F1 World tour, and we are keeping up with him as he goes. From the early days in Bahrain, through to the Virgin Racing camping in Britain, we've followed each step. You can do the same by reading his travel blog or on Twitter. Now we're on to the final two races before the summer break - Germany and Hungary.

Hello and welcome back to Alex Snell's epic F1 World Tour. So far, we've had a peek at Alex's travels through eight Grand Prix weekends in countries all around the globe. This time, he gets to come home, taking in the British GP at Silverstone. If you want more information you can head on over to his travel blog or stay tuned to Twitter for up to the minute information. For now, though, it's on with the journey.

Here we are again, ready to catch up with the travels of our intrepid explorer Alex as he takes in each and every Grand Prix of the 2010 season. We've been following him for a while now and you can catch up with all his adventures here, visit his Twitter account for up to the minute info, or head on over to his travel blog for more words and pictures.

Hola, people! You find me sat in the main grandstand opposite the Ferrari garage awaiting the start of this afternoon's pit walk, and unsurprisingly, the Alonso fans are already here in their hoards! First impressions of the circuit are promising. I've gone General Admission for this race and thankfully there seem to be loads of really good vantage points around the circuit.

Following on from the first part of Alex's unofficial tour, we're looking at the next couple of races - Malaysia and China. Don't forget you can follow Alex's Twitter account to stay right up to date, and see more posts and pictures on his travel blog.

We've been following the progress of Alex Snell since he embarked on his globe-trotting adventure, but now we have teamed up to bring you the best bits of his journey so far right here on Sidepodcast. Thanks to Alex, and you can follow the blog directly, or his Twitter account to keep right up to date.